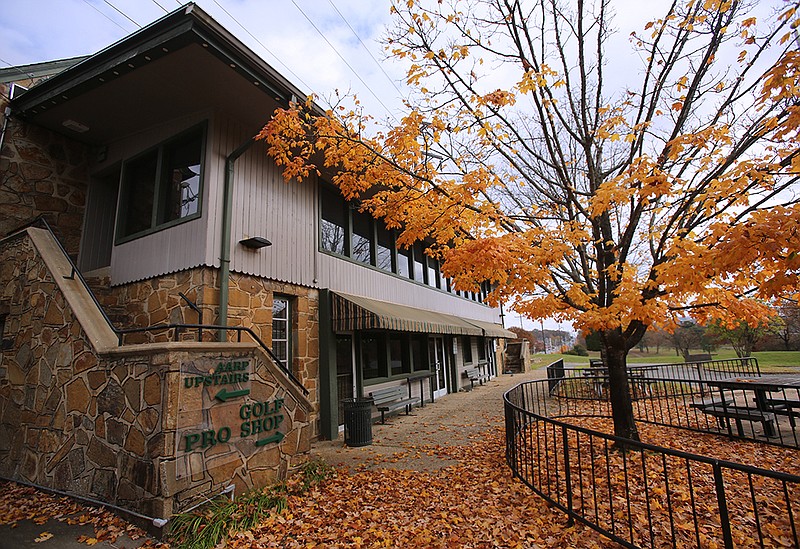 The clubhouse of the former War Memorial golf course on Tuesday, Nov. 11, 2020, in Little Rock. The golf course was recently added to the National Register of Historic Places.
(Arkansas Democrat-Gazette/Thomas Metthe)

Little Rock’s shuttered War Memorial Park golf course was one of 15 properties in the state listed on the National Register of Historic Places, the Department of Arkansas Heritage announced Tuesday.

The course, which was closed in July 2019, was the city’s first municipal golf course when it was completed in 1937. The nomination notes the WPA Rustic architecture style of the course’s buildings, including the clubhouse and gazebo, that was characteristic to the era of the U.S. New Deal Works Project Administration after the Great Depression.

The city is to place a plaque that notes the site’s listing in the National Register, according to parks design and development manager Leland Couch.

After the Arkansas Historic Preservation Program informed the city that its state review board was considering the course’s nomination early this year, Chief Deputy City Attorney Alex Betton wrote a letter to the program’s director that filed an objection against the consideration but did not state a reason.

Betton said he was instructed by Charles Blake, chief of staff for Mayor Frank Scott Jr., to draft the letter because Betton had defended the city in an injunctive relief action to keep the city from closing the golf course that involved the pending National Register listing.

Scott said Tuesday that he did not recall why the city had filed the objection.

In June 2019, shortly before the course’s closure, Little Rock resident John McCarty filed a petition for an injunction in court seeking to delay the closure until the eligibility of the course for the National Register of Historic Places was determined. Pulaski County Circuit Judge Wendell Griffen dismissed the case in December of that year, ruling that McCarty’s concerns did not threaten the health, safety or welfare of residents, and that the matter was a political question that the court could not exercise jurisdiction over.

Little Rock closed the course, along with the Hindman Park golf course, as part of $2.1 million in cuts to the 2019 budget. Scott then convened a task force to make recommendations on what other recreational opportunities the courses could offer. The panel’s ideas included large and small ball fields, a bike park, pavilions and picnic areas, a dog park, a playground and an open-lawn stage.

In August, a request for proposals from the city seeking a golf entertainment venue to lease a portion of War Memorial Park came up empty. After scrapping a proposed 1% sales tax that would have funded park improvements, Scott has suggested the city may need to find other ways to fund those improvements, such as public-private partnerships.

Scott said Tuesday that the city still had “evolving plans” for the park, but did not elaborate specifically when asked about conversations with any entity.

Listing in the National Register of Historic Places is an honorary designation that does not put any limitations or covenants on the site from the federal government, though it does put in place protective review of federal projects that might adversely affect the site’s character.

The Masters Champions Dinner is on, and Tiger Woods is serving fajitas and sushi
Bryson DeChambeau consensus favorite to win Masters at 8-1 odds
Comment